Most enterprise and data center networks have at least one instance of vulnerability scanning software deployed somewhere in the network. This software regularly scans ranges of IPv4 addresses within the network in an effort to identify active hosts, probe them further, and analyze them for open vulnerabilities. A few examples of such software include Nessus, Burp Suite, Qualys, Nmap/Zenmap, and so on.

In this blog post, we will reproduce this behavior and demonstrate how the delicate dance between Control Plane Policing (CoPP) and ARP Glean can cause these types of connectivity issues in a production network.

First, let’s review the topology we will use in this article.

Card 3 Port 14 of the Ixia traffic generator emulates a security scanner. This port will send UDP packets towards random IP addresses in the 10.0.0.0/16 subnet associated with VLAN 100 sourced from 192.168.1.25 in VLAN 1. These packets are destined to the HSRP virtual MAC address, which means N9K-1 must route this traffic from VLAN 1 into VLAN 100. These packets will be treated as ARP Glean and will be punted to the control plane, as N9K-1 does not have ARP resolved for any IP address in the 10.0.0.0/16 subnet.

First, let’s analyze this topology in the “working state”, when the traffic from the Ixia’s Card 3 Port 14 emulating the security scanner is not running. In this steady state, no loss is observed for the production traffic running between the other two ports of the Ixia traffic generator. The 22 frames that Ixia reports are “missing” are the frames in-flight between a transmitting port and a receiving port - this is not indicative of packet loss, as the value is not steadily incrementing.

Next, let’s see how much packet loss is incurred as a result of ARP Glean and CoPP when a single switch’s ARP table is completely wiped. First, we will clear CoPP statistics on N9K-1 with the clear copp statistics command.

Next, let’s validate that no packets have been dropped under any CoPP class.

If we check CoPP statistics, we can see 5,798,784 bytes were dropped under the “copp-system-p-class-l3uc-data” CoPP class map.

If we investigate this class map further, we can see that glean traffic is matched under this class through the “match exception glean” clause under the relevant class map.

The purpose of this test is to show the minimal impact of a typical interaction with ARP Glean traffic. Usually, if a router receives a large amount of traffic destined to one or more new hosts (where “new” means that the host’s IPv4 address was not resolved to a MAC address in the router’s ARP table), traffic to those hosts is dropped for a few milliseconds as it gets punted to the control plane for resolution. Once the host’s MAC address is resolved via ARP, the traffic is forwarded normally through the data plane.

Now that we understand what a typical ARP Glean interaction looks like, let’s explore the impact a security scanner can have on a router’s ability to maintain its ARP table.

After clearing CoPP statistics and Ixia traffic statistics once more, we instructed Card 3 Port 14 of the Ixia to begin sending UDP traffic destined to random hosts in the 10.0.0.0/16 subnet through N9K-1. This traffic will be sent at a rate of 1Mbps. Note that the existing production traffic has not been stopped for this test.

The CoPP statistics for N9K-1 show that N9K-1 is receiving a large amount of ARP Glean traffic, which is being dropped in hardware.

If we check on the Ixia traffic statistics for our production traffic, we can see a fair amount of packet loss has crept into our production network.

At first glance, this may not make sense. Both Nexus switches had a populated ARP table before the security scanner traffic started. When an ARP entry gets close to expiring, the Nexus should attempt to proactively refresh that entry by sending an ARP request for that IP to confirm the same IP/MAC binding is still valid. This traffic is ARP traffic, which should fall under the “copp-system-p-class-normal” CoPP class-map, not the Glean-focused “copp-system-p-class-l3uc-data”.

So if the ARP table should remain stable, where is the packet loss coming from? Let’s briefly turn our attention to N9K-2’s CoPP statistics.

Here, we can see drops under N9K-2’s “copp-system-p-class-normal” CoPP class-map, which is where ARP traffic would fall under. Where is this ARP traffic coming from? A brief look at the NX-OS Ethanalyzer control plane packet capture utility should tell us.

Here, we can see that N9K-1 (who owns IP 10.0.0.2) is generating a large amount of ARP Requests for a variety of IPv4 addresses in the 10.0.0.0/16 subnet. The sequence of events causing this outage is beginning to take shape!

First, the security scanner is sending a large amount of traffic to a variety of IPv4 addresses in the 10.0.0.0/16 subnet. 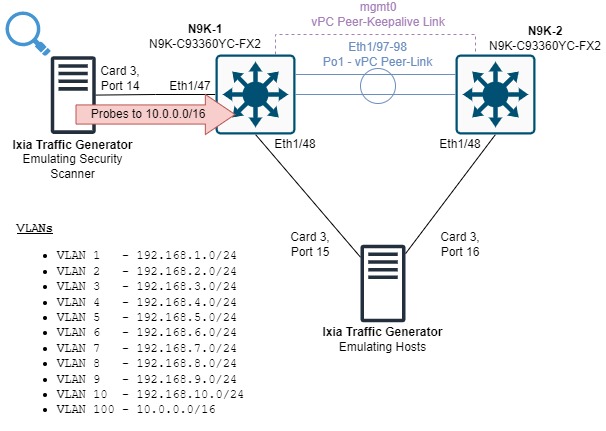 N9K-1 receives this traffic and punts it to the control plane, attempting to use ARP to resolve a MAC address for each IPv4 address. 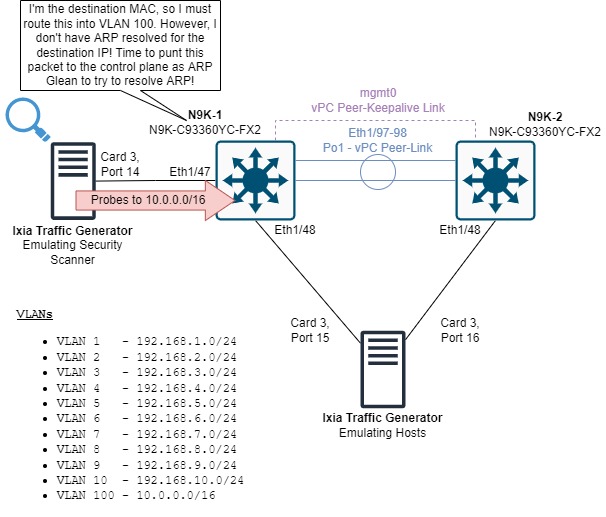 Since N9K-1 is inundated by ARP Glean traffic, it logically generates a large amount of ARP Requests. 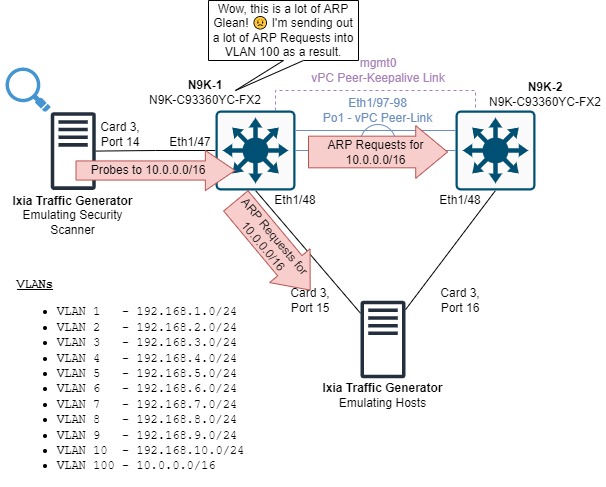 N9K-2’s control plane is overwhelmed by these ARP Requests and has no choice but to start dropping them in hardware due to CoPP. 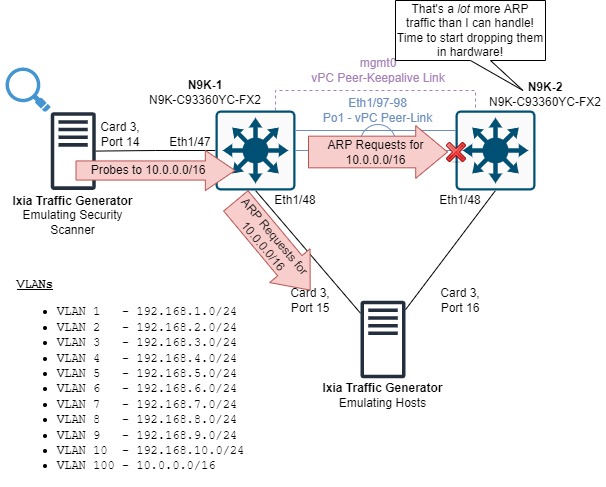 When N9K-2 needs to refresh an entry in its ARP table, it sends an ARP Request out for the relevant IPv4 address. 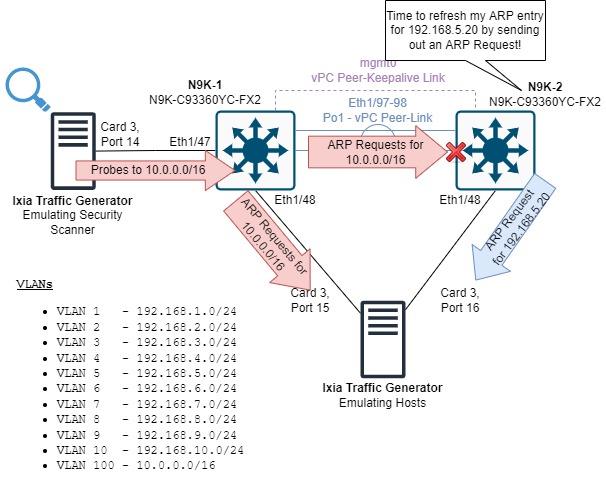 The ARP Reply in response is “starved out” by the large quantity of ARP Requests sent by N9K-1. 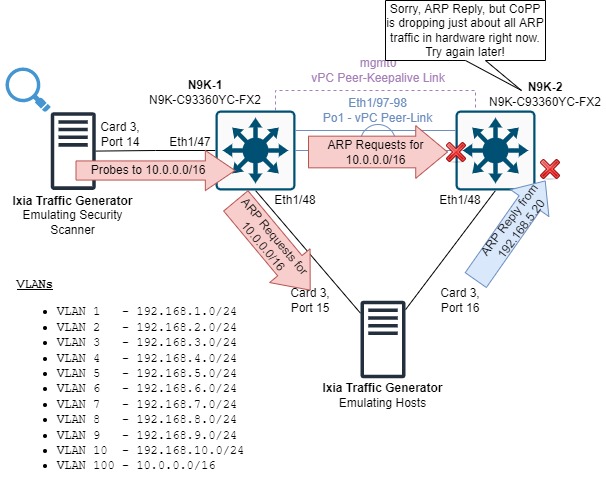 Eventually, N9K-2’s ARP entry expires, causing production traffic destined to the IPv4 address in that entry to be punted to the control plane as ARP Glean. 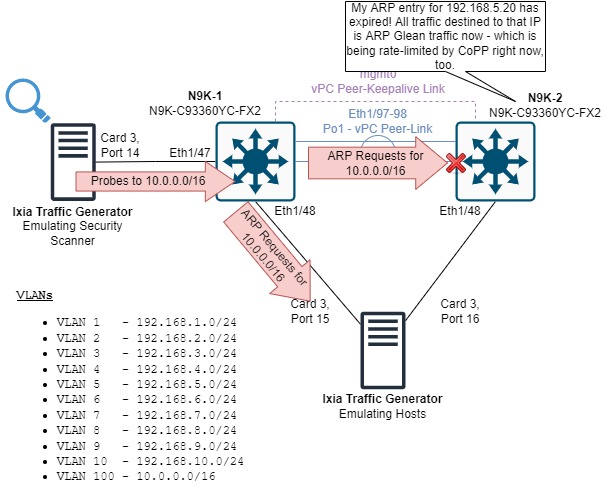 This action (combined with N9K-2’s inability to expeditiously resolve ARP for the production host’s IPv4 address) introduces our connectivity issues, which could include throughput issues, application performance issues, and outright connectivity issues.

Statistically, eventually the ARP Reply for the production host will be allowed by N9K-2’s CoPP policy, allowing N9K-2 to resolve ARP for that host. This adds complexity to the problem. First, the occurrence of the problem seems extremely intermittent - sometimes an individual host or flow of traffic will stop working and then start working again. Second, the impact of the problem seems extremely intermittent - the individual host or flow affected by the issue will change from one instance of the issue to another.

Ultimately, the fix for this issue is one of two actions:

Note: The correct action is never to disable CoPP entirely on your switches. Not only is this not supported on Nexus 9000 series switches, but logically, this is equivalent to driving without a seat belt.

In this article, we demonstrated a practical, real-world example of vulnerability security scanners can sometimes wreak havoc in a production network in odd, unpredictable ways. By combining our understanding of network device control and data planes, our knowledge of ARP Glean, and our comprehension of CoPP, we can identify the sequence of events that causes vulnerability security scanners to cause network degradation or outages and take the appropriate steps to fix them.