Both traffic generators are connected to the switch via access switchports in VLAN 1.

In this topology, there are two UDP traffic flows. One is from Host-1 to Host-2, and the other is from Host-2 to Host-1. Both traffic flows send a single packet per second. At the moment, there is no packet loss for either flow.

This particular Nexus switch is a Nexus 93180YC-FX. The data sheet for this switch suggests that this model of switch has sub-microsecond port-to-port latency capabilities:

The fact that the traffic flow from Host-1 to Host-2 has significantly higher latency than advertised suggests something is going on with this traffic flow. Let’s investigate further by using the Embedded Logic Analyzer Module (ELAM) troubleshooting tool to dig into the ASIC’s forwarding decision for a packet within this traffic flow.

This output has three important pieces of information:

The outgoing interface information present in this output suggests that the switch will eventually forward the packet out of Ethernet1/46 (which can be proven through the show system internal ethpm info all command), but the index corresponding with the supervisor hit (which can be decoded through the show system internal access-list sup-redirect-stats command) suggests there’s an exception causing this packet to be punted.

If we review CoPP statistics on this switch with the show policy-map interface control-plane command, we can see that there are non-zero transmission statistics under the “copp-system-p-class-exception” class.

Finally, if we use the Ethanalyzer control plane packet capture tool and filter it on packets sourced from or destined to 192.168.1.100 with the ethanalyzer local interface inband display-filter ip.addr==192.168.1.100 limit-captured-frames 0 command, we see two types of packets:

Thus far, the only symptom of this issue we’ve seen is high latency. However, another possible symptom you may observe as a result of this issue is packet loss. At the moment, our traffic flow is only 1 packet per second, which is very slow compared to a real traffic flow. 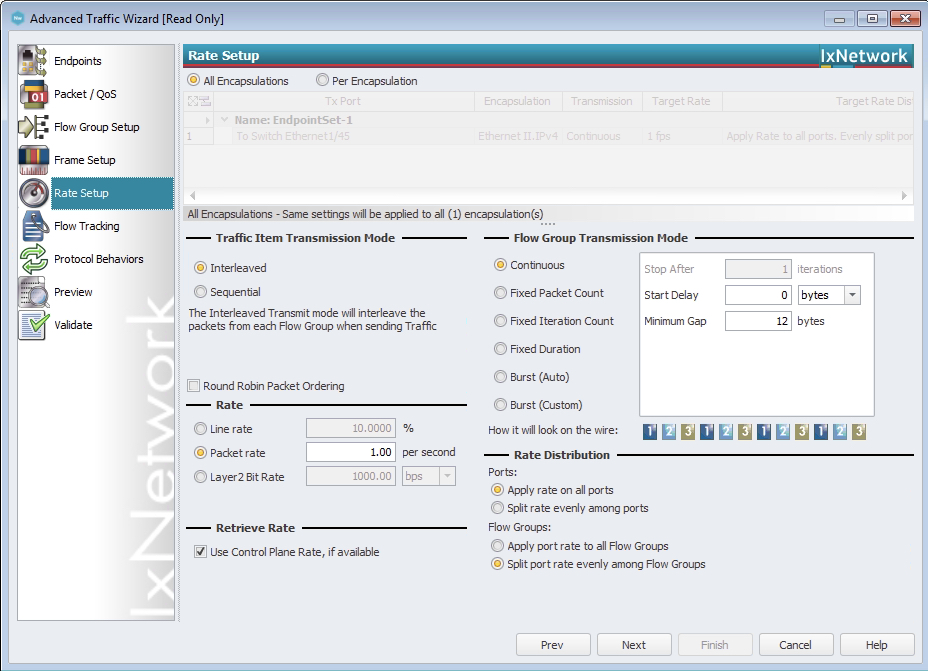 Let’s increase the speed of this traffic flow from 1 packet per second to 1,000 packets per second.

Now, we can see that the traffic flow from Host-1 to Host-2 has a significant amount of packet loss.

If we re-check our CoPP statistics, we can now see drops under the copp-system-p-class-exception CoPP class. This is the root cause of the packet loss observed in this traffic flow.

There are two tactics to fix this issue:

Theoretically, the first tactic is the “correct” solution. However, as network engineers, we rarely have direct control over the configuration of hosts connected to the network, so we will adopt the second tactic.

Now that we’ve applied this change, let’s verify whether we see our data plane traffic flow in the control plane using Ethanalyzer.

This traffic isn’t showing up in the control plane - let’s clear our CoPP statistics and verify if the copp-system-p-class-exception CoPP class is transmitting or dropping any traffic.

Our CoPP statistics for this class are clean. Let’s confirm with an ELAM that a packet in this traffic flow is no longer being punted from the data plane to the control plane.

We don’t see a SUP hit line in this output, which implies the ASIC is not punting this packet. We also don’t see any flags under the LUD section of this output the same way we did previously. This indicates the traffic is being forwarded through the data plane at high bandwidth with low latency without any involvement from the control plane.

Let’s confirm this by reviewing the statistics for this traffic flow from the traffic generator’s perspective. We don’t see any packet loss:

We also see low latency numbers for both traffic flows:

Now that we’ve investigated and resolved this issue, you may have two final lingering questions:

With respect to the second question, this behavior is mandated by the IETF through Section 5.2.7.2 of RFC 1812 (Requirements for IP Version 4 Routers):

This is what I like to call an “RFC MUST”, which is defined in RFC 2119 (Key words for use in RFCs to Indicate Requirement Levels). As a result, network vendors (Cisco, Juniper, Arista, Dell, HPE, etc.) cannot disable this behavior by default without deviating from an RFC that defines one of the fundamentals of modern-day networking, even if such behavior would be a net positive for the networking world at large. As you can imagine, if one vendor deviated from the RFC, other vendors could have a field day with this by claiming that the first vendor is not RFC compliant with IPv4 networking. From an optics perspective, that looks really bad - after all, if you heard that a specific vendor didn’t fully support basic IPv4 networking in the modern day, your first instinct would probably be to avoid that vendor at all instead of investigating specific details behind this claim!

Ultimately, this issue must be fixed through an IETF RFC that updates RFC 1812 (and the IPv6 equivalent, as I believe the behavior is identical with IPv6 and ICMPv6 Redirect messages).