In December of 2019, a customer opened a TAC case where the copy running-config startup-config command would hang and time out after several minutes on a few brand-new Nexus switches. The command returned a “Configuration update aborted: timed out” error message.

This was not my first time dealing with a failed copy run start command on a Nexus. I’ve seen similar issues when the SSD begins to fail, causing the bootflash to become unresponsive or mounted in a read-only state. However, the error message is slightly different and doesn’t take several minutes to time out. Furthermore, the fact that this issue happened on brand-new hardware across multiple switches made me think something else was going on aside from hardware failure.

After gathering logs from the affected switches and doing some research, I suspected there was something within each switch’s configuration that could be causing this issue. I grabbed a fresh switch in our lab with no configuration on it.

First, I decided to benchmark how long a “normal” copy running-config startup-config takes by running the show clock command before and after saving configuration. I chained all three commands together to eliminate any human response times from the equation.

Next, I decided to benchmark a copy running-config startup-config with this configuration using the same tactic as before.

As you can see, we reproduced the exact issue! The switch took about 8 minutes to try to save the configuration. After 8 minutes, the operation bailed out.

Now that we have some configuration that reproduces the issue, we can strip out bits and pieces of the configuration until we find what combination triggers the issue. After some poking and prodding, I found that the customer had an MOTD (Message of the Day) banner similar to the one shown here.

You may notice that the MOTD banner delimiter, Q, is identical to the character used by the CLI alias. If we remove the MOTD banner entirely, we are no longer able to reproduce the issue.

Similarly, if I re-configure the MOTD banner, but remove cli alias name q exit from the configuration, then I am no longer able to reproduce the issue:

Now that we know these two configuration elements are related to this issue, we can dig into the issue deeper. One thing you may wonder is, why does a normal copy running-config startup-config command take 5 seconds to execute? Surely it doesn’t take a Nexus switch 5 seconds to copy a big string in system memory to a file on an SSD? In reality, copy running-config startup-config is much more complicated than just writing a string to a file. In the background, NX-OS keeps two versions of the startup-config - a “binary” version, and an “ASCII” version.

The binary version is a gunzipped archive file (.tar.gz) consisting of each individual NX-OS software component’s (OSPF, BGP, EIGRP, URIB, etc.) startup-config. The file format used to store this information varies, but many software components have standardized on a feature known as PSS (Persistent Storage Service), which is a lightweight key-value pair database used to store configuration and operational state. This binary version is optimized so that the switch can quickly load the configuration after the switch is reloaded. If the binary version didn’t exist, then when a Nexus switch reloads, it would restore the startup-config line-by-line (which could take a long time, depending on the contents and length of the configuration).

Whenever you apply a line of configuration in the CLI, that line of configuration usually gets translated to an object within the relevant NX-OS software component’s PSS database. For example, if you create a new OSPF process by configuring router ospf 1, a new OSPF process will be spun up, and information about that process’s configuration (such as the router ID, interfaces activated under the protocol, etc.) will be stored within a PSS database created by the process. The OSPF process does not retroactively parse the running-config or startup-config to figure out how it should be configured.

An example of where the binary startup-config is located and how to extract it is shown here.

Note: It goes without saying that messing with the contents of these files is not supported by Cisco.

The ASCII version is a plaintext file consisting of each individual line of configuration. This is the output of show startup-config that we are used to in NX-OS. An example of where the ASCII startup-config is located is shown here.

Note: Of course, you could just run show startup-config to display this same file - the two are identical.

In NX-OS, when you execute the copy running-config startup-config command, NX-OS compiles the binary version of the startup-config and generates the ASCII running-config. After generating this ASCII running-config, NX-OS’s MDP (Model Driven Programmability) set of features validates relevant parts of the ASCII startup-config can be translated to an object model through a component named DME (Data Management Engine). DME is essentially a single large data structure that houses the configuration and operational status of multiple NX-OS software components. This data structure can be modified through the CLI when you make configuration changes like normal, or it can be fetched or modified using NX-API, or you can stream the values of specific keys in the data structure through telemetry.

A visual example of how DME “sits” in between each software component’s object store (PSS), the CLI, and other various configuration methods is shown in the excerpt below from Mike Wiebe’s BRKDCN-2025 2020 Cisco Live session. 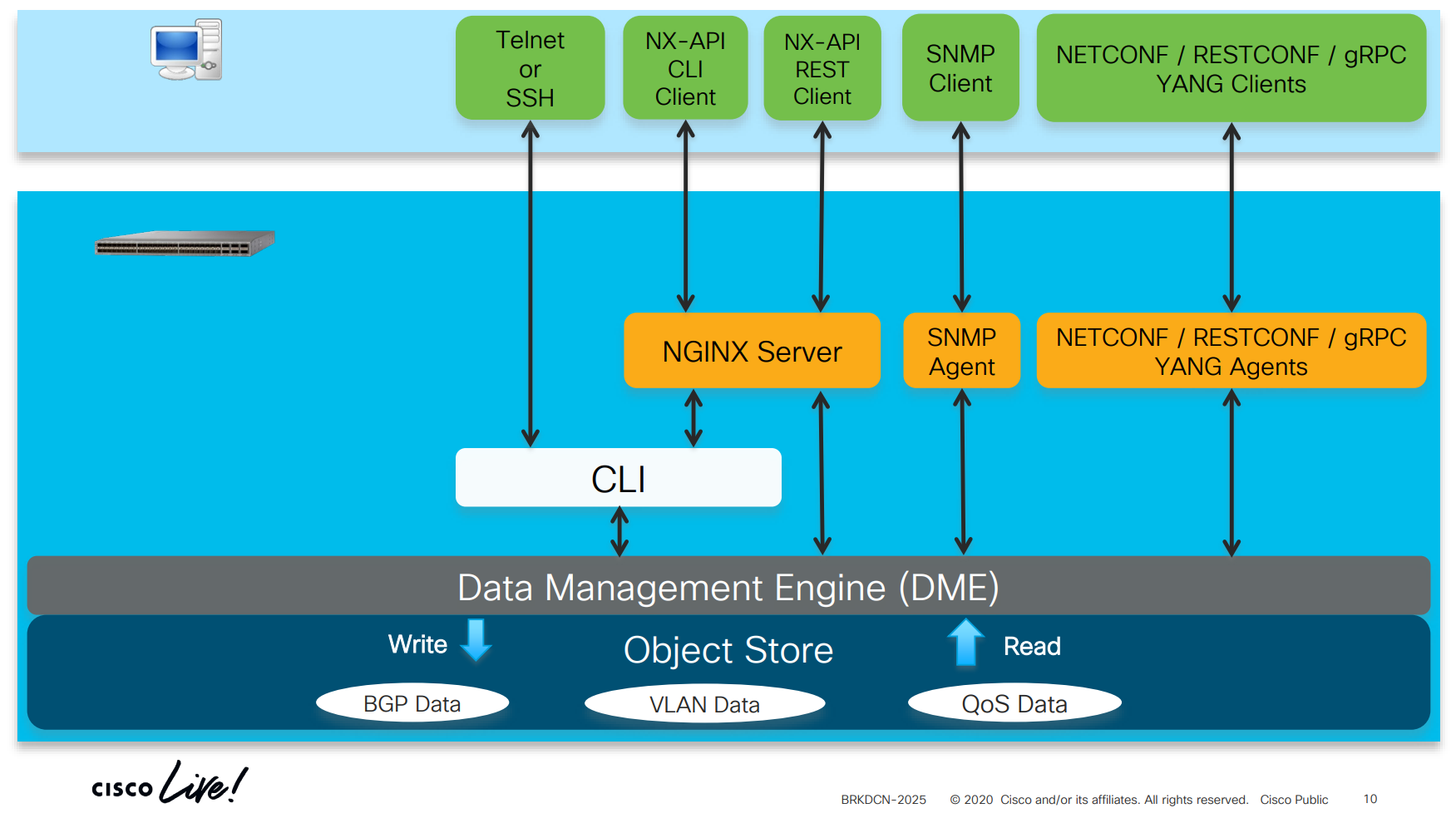 Here is where we’ll bring everything back to the issue this customer faced. A log showing how MDP processes the ASCII startup-config is shown below.

As you can see, this log shows how MDP is processing the ASCII configuration line-by-line and identifying lines of configuration that should be present in the DME data structure. If we scroll further down in the log, we see how the MOTD banner configuration is processed.

As you can see, the command immediately after the banner motd Q command is incorrectly translated to the exit command because of the cli alias name q exit configuration command. This causes the CLI parser to exit the global configuration context, causing all subsequent commands in the ASCII startup-config to fail because they are executed in the wrong context. These subsequent syntax errors cause MDP to take an exceptionally long time to process the rest of the ASCII startup-config, eventually causing the entire copy running-config startup-config command to time out entirely.

My personal opinion? The moral of this story is that software development is hard. No amount of testing or Q/A efforts will fully prepare your software project for the unique ways users choose to use your code. There is no such thing as bug-free code; to write code is to create bugs!