Illustrating Why the First ICMP Ping is Lost

Whether you are learning about computer networking through practice labs or are a veteran network administrator, you may have noticed that occasionally, when you test reachability to a specific device with the ping command, the first packet is lost.

In this article, we will illustrate how and why this behavior happens by focusing on a simple topology where a router is attempting to ping a directly connected host.

First, let’s review the topology we will use in this article.

Let’s walk through precisely what happens when the ping 192.0.2.10 command is executed. First, the management plane sends a message through InterProcess Communication (IPC) to a software process of the network operating system responsible for handling the Internet Control Message Protocol (ICMP) for the device. We will refer to this software process as the “ICMP Process”. This IPC message informs the ICMP-related sofware process that the user would like to send ICMP Echo Request packets to a specific IPv4 address. 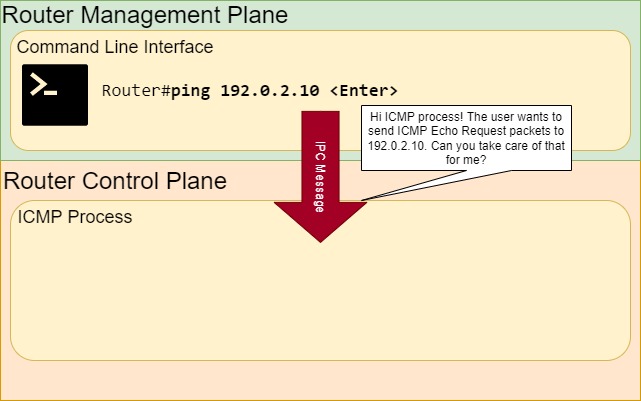 The ICMP-related software process will internally craft an ICMP Echo Request header with a starting sequence number. In Cisco IOS-XE, this is typically a sequence number of 0. 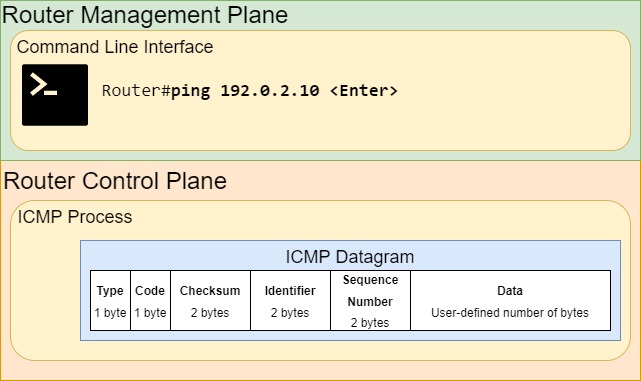 This data is typically passed to another software process via an IPC message responsible for crafting IPv4 and Ethernet headers for the packet. We will refer to this software process as the “IP Process”. 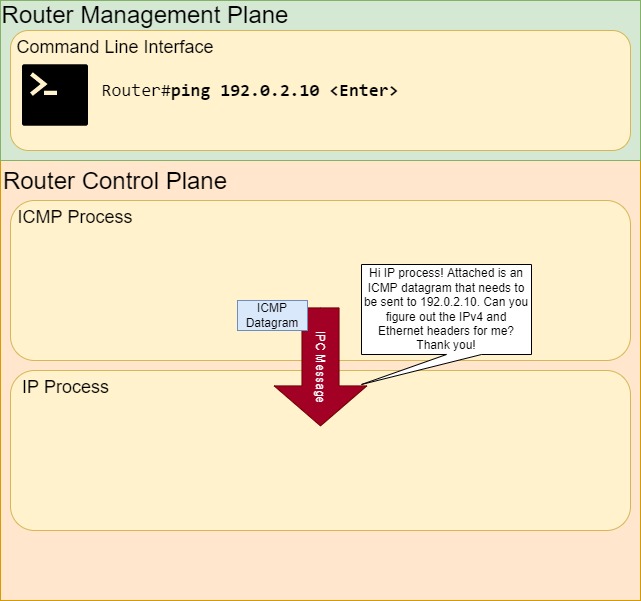 While crafting the IPv4 and Ethernet headers, the router references its routing table for the destination IP address 192.0.2.10. In our scenario, the longest prefix match for this IP address is the 192.0.2.0/24 route directly connected to interface GigabitEthernet2.

Based on this information, the router knows the following facts:

The one fact that the router is currently missing is the destination MAC address of the Ethernet header. This MAC address must be the MAC address assigned to the host’s eth1 network interface, which is aac1.abd2.5c3f as shown through the output of the ip link show eth1 command. 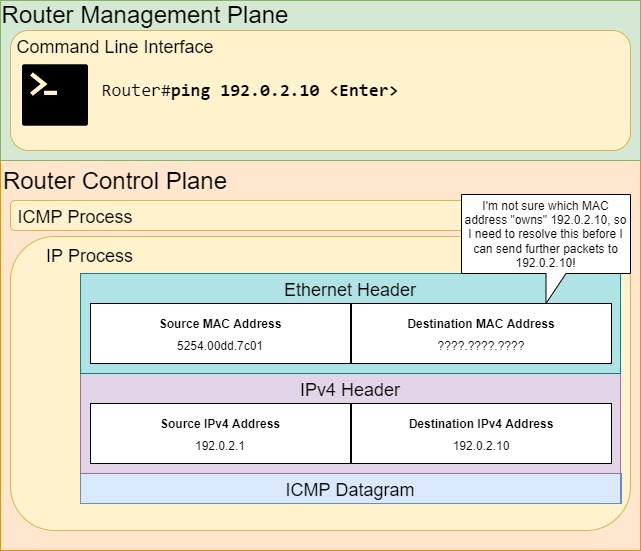 The router cannot proceed with sending this ICMP Echo Request packet without first resolving the MAC address associated with the host assigned 192.0.2.10. Therefore, the IP Process will erase the ICMP packet from memory. 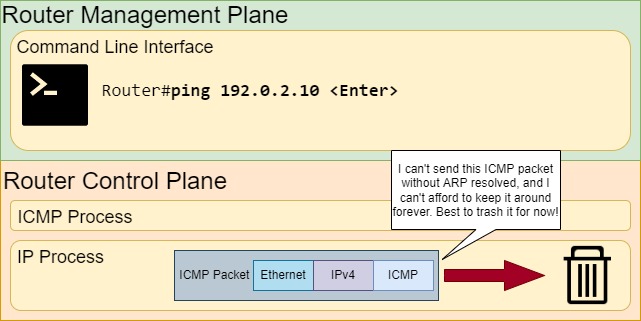 Note: The reasoning behind why this ICMP Echo Request packet is erased from memory is explained in the “Why Is The First Packet Dropped?” section of this article.

To populate the ARP cache with a valid entry, the router will broadcast an ARP Request frame to all hosts on the 192.0.2.0/24 subnet asking for the host assigned the 192.0.2.10 IP address to respond with the host’s MAC address.

The host will respond with a unicast ARP Reply frame informing the router that the host’s MAC address is aac1.abd2.5c3f.

This procedure is demonstrated through the packet capture on the host below.

At this brief moment in time, the command line output for the ping 192.0.2.10 command will look like the following.

The ICMP Process will repeat the above process when the timeout period for the first ICMP Echo Request packet expires. It will craft the header for an ICMP Echo Request packet and increment the sequence number within the header. For Cisco IOS-XE, the sequence number will be 1. Just like for the previous ICMP packet, this ICMP packet is passed to the IP Process via an IPC message so the IP Process can craft the IPv4 and Ethernet headers.

Now that the ARP table contains an entry for 192.0.2.10, the IP Process can craft accurate IPv4 and Ethernet headers for the ICMP Echo Request packet. 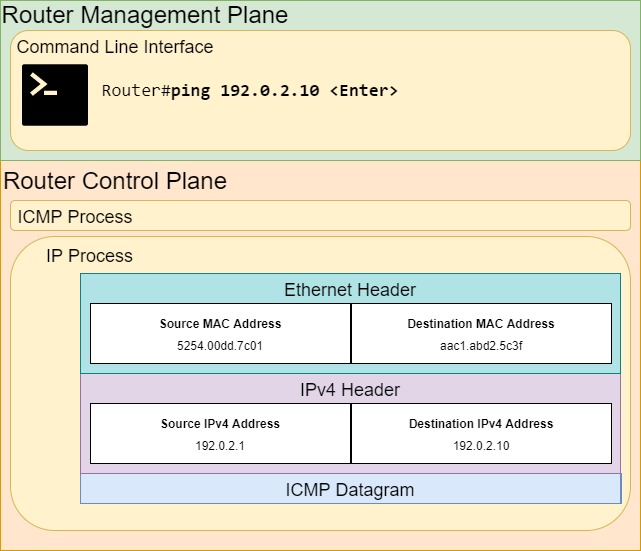 The IP Process will hand this completed ICMP Echo Request packet off to the data plane for transmission on the wire towards the host. 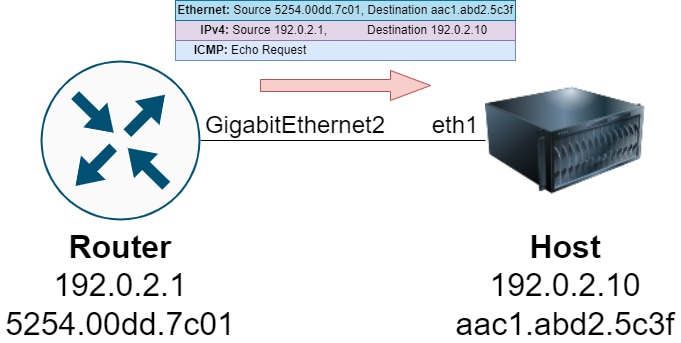 The host will receive this ICMP Echo Request packet and respond with an ICMP Echo Reply packet. 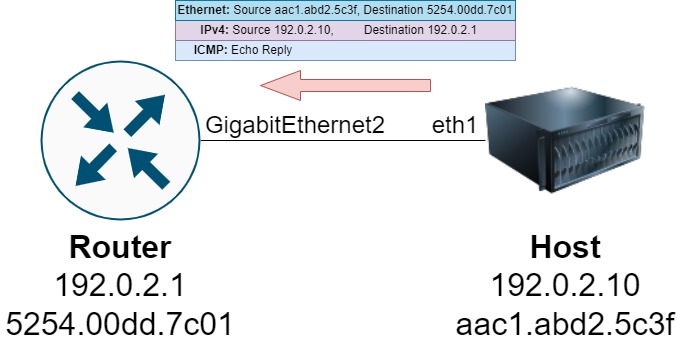 The data plane of the router will receive this ICMP Echo Reply packet, recognize that the packet is destined for the router itself, and send the packet to the control plane (this action is commonly called a punt). The control plane will route this packet to the ICMP Process. The ICMP Process will report that there is bidirectional connectivity with 192.0.2.10. At this brief moment in time, the command line output for the ping 192.0.2.10 command will look like the following.

This procedure will repeat three more times, with ICMP Echo Request packets being crafted and transmitted by the router and ICMP Echo Reply packets sent in response by the host. At the conclusion of this transaction, the command line output for the ping 192.0.2.10 command will look similar to the following.

Why Is The First Packet Dropped?

A common question network operators may ask is, “Why is the first packet erased from system memory? Why not buffer the packet in system memory, wait until ARP is resolved for the destination IPv4 address, then transmit it as normal?”

There are two valid explanations for this behavior - conservation of system memory, and an assumption that networks should be lossless.

The example in this article utilizes ICMP packets that are 114 bytes long on the wire:

This means the network device would need to allocate a minimum of 114 bytes of system memory (potentially more, if metadata about the packet needs to be stored) to buffer the ICMP packet while ARP resolves. This packet would need to be buffered in system memory for the ICMP timeout period (default 2 seconds on Cisco IOS-XE) while the router tries to resolve ARP for the destination.

There are three problems with this:

As you can imagine, buffering an arbitrary number of packets of an arbitrary size in system memory for a prolonged amount of time is not a scalable option. Several megabytes of the network device’s system memory may be constantly used to buffer packets that may never be transmitted out of the network device. This behavior does not align with the philosophy that network operating systems should utilize system memory as efficiently as possible, so network operating systems choose to erase these packets from system memory as quickly as possible instead of buffering them.

Networks are not Lossless

The protocols that modern computer networks are built upon were originally designed during the height of the Cold War. At the time, the goal was to ensure geographically disparate computers could reliably communicate over unreliable mediums, such as phone lines damaged from warfare, spotty satellite connections, or erratic radio transmissions.

If we fast forward to modern times, the threat of nuclear warfare has subsided, but the unreliable nature of our transmission medium has not. Damaged copper and fiber-optic cables can malform traffic, and the periodic oversubscription of network devices (especially over the Internet) means that networks are lossy in nature. Applications cannot assume that the network is available 24/7/365 and will deliver every single piece of data without loss; however, applications can assume that the underlying protocols computer networking is built on will eventually deliver data as requested.

For this reason, a router dropping a packet instead of buffering it while the router resolves ARP for a destination is a minor inconvenience in the grand scheme of things. In a worst case scenario, this behavior delays connectivity to a destination by a few tenths of a second, with all subsequent connectivity working as expected at normal speeds.

In summary, it is expected behavior for most network operating systems to drop the first ICMP packet sent through the ping command if a router does not have the MAC address for the destination resolved through ARP. If you re-run the ping command immediately after seeing this behavior, you will most likely not see this behavior. This behavior is typically only observed when you are sending traffic to an IP address for the first time (such as if a new host has been recently connected to the network).

This behavior has not been seen on the following network operating systems:

How to Create a Simple, Free Blog with Jekyll and GitHub Pages