RIPv2’s automatic network summarization feature is easy to misunderstand, which can be a recipe for disaster in a production environment or on the CCIE R&S lab exam. Let’s analyze the exact behavior behind this feature by experimenting with it in a quick lab!

In this lab, we seek answers to the following question:

First, let’s verify that all of R1’s interfaces are up/up, including the loopback interfaces being advertised by RIPv2.

Next, let’s confirm that RIPv2 is automatically performing network summarization, as well as advertising all desired networks.

If we activate debugs, we can see that RIPv2 is sending an update out of Gi0/1 containing a total of 4 routes.

R1 has a total of 6 up/up Layer 3 interfaces with unique subnets. Split Horizon is enabled by default on Ethernet interfaces, which will prevent the 10.0.0.0/30 network from being advertised out of Gi0/1. As a result, we expect 5 networks to be advertised by RIPv2, but only 4 are advertised instead. If you refer to the “Routing for Networks” section in the show ip protocols output above, RIPv2 reports it is routing 3 separate networks. These discrepancies can make understanding RIPv2’s behavior confusing.

We can see which specific prefixes RIPv2 is advertising through debug ip rip:

A packet capture performed on R1’s Gi0/1 interface confirms that a total of four prefixes are present in the RIPv2 Update packet. 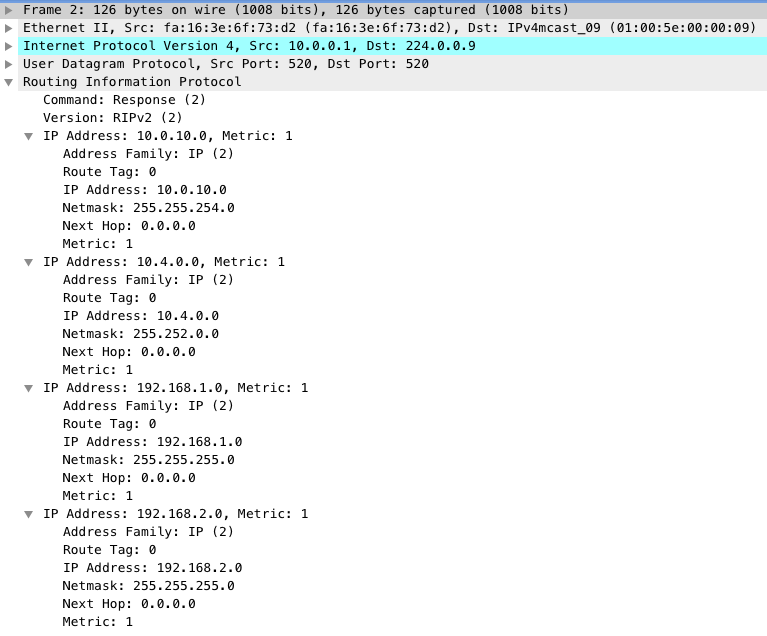 A summary of the behavior imposed on all 6 of R1’s up/up Layer 3 interfaces can be found in the table below:

The output of show ip protocols confirms that RIPv2 is not performing automatic network summarization.

Now, let’s reactivate RIPv2 debugs on R1 to see how many prefixes are being advertised.

We see all 5 expected prefixes inserted in the RIPv2 update. Checking R2’s RIP database, we can also see all 5 prefixes present in the database.

Finally, let’s confirm that all 5 prefixes are present in R2’s routing table.

The best explanation for this behavior can be found in the “Configuring Routing Information Protocol” chapter of the IP Routing: RIP Configuration Guide for Cisco IOS Release 15M&T. Under the “RIP Route Summarization” heading, the guide states that automatic summarization happens “by summarizinig subprefixes to the classful network boundary when crossing classful network boundaries.” Furthermore, under the “Summarizing RIP Routes” heading, the guide states the following:

Individual organizations (such as businesses, universities, etc.) were originally assigned classful networks to use. However, individual organizations often connected to and required networking between each other. Since classful boundaries were typically cleanly split between organizations, RIPv2’s automatic summarization feature assisted with reducing the size of routing tables and RIPv2 update packet sizes with minimal effort needed on the part of the network administrators. This was especially important during the early ages of the Internet, as the processing and memory capabilities of routers were much scarcer than they are today.

To accomplish this, rules needed to be implemented in software to have this feature work intelligently. The Cisco IOS implementation of RIPv2’s automatic route summarization is essentially as follows:

RIPv2’s automatic summarization feature is often misunderstood - I hope that this helped you understand it better!