A common support case I have seen during my career in Cisco TAC is where customers observe intermittently incrementing input discard counters on one or more interfaces of a Cisco Nexus 5500 series switch. This symptom is usually followed by reports of connectivity issues, packet loss, or application latency for traffic flows traversing the switch.

Oftentimes, this issue is highly intermittent and unpredictable. Once every few hours (or sometimes even days), the input discards will increment over the course of a few dozen seconds, then stop. This is a network administrator’s worst nightmare - an intermittent issue that is impossible to predict and only happens for a short period of time, but has major impact to the network.

In this post, we will briefly explore what input discards mean, the challenges with troubleshooting this intermittent issue manually, and how we can use Python to help troubleshoot.

What are Input Discards?

Cisco Nexus 5000, 6000, and 7000 switches utilize a Virtual Output Queue (VOQ) queuing architecture for unicast traffic. This means that when a packet enters the switch, the switch does the following: 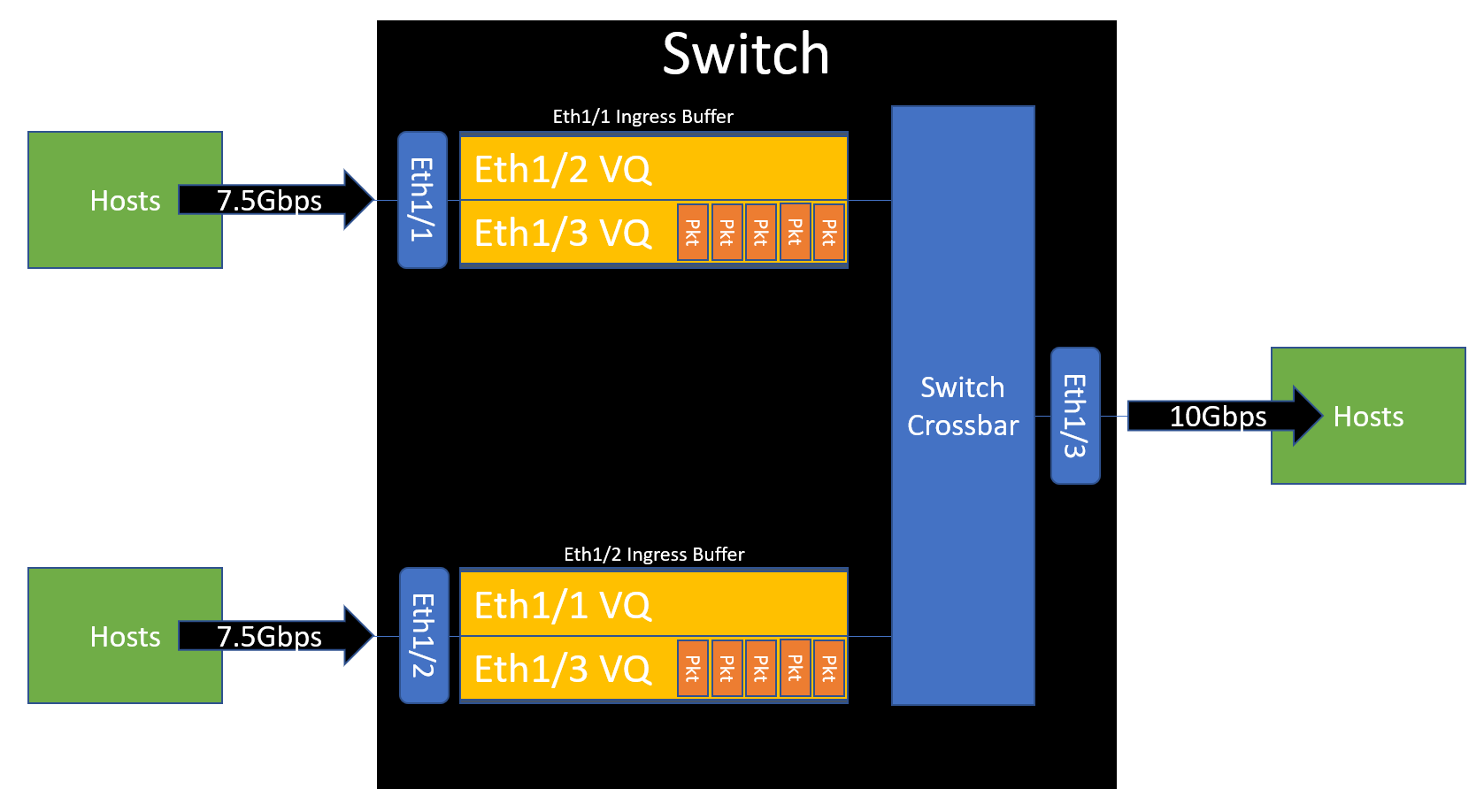 Note: In this picture, there is a total of three interfaces, so each interface only has two virtual queues. In reality, most switches have anywhere from 24 to 48 ports, sometimes more. Each potential egress interface gets its own unique virtual queue. Also, note that the ingress buffer for Ethernet1/3 is not pictured here since it is not relevant - in reality, Ethernet1/3 would have ingress buffers.

The word “long” is purposefully ambiguous because it is subjective. Within a matter of milliseconds, an egress interface can become congested, ingress buffers can fill, and input discards can begin to increment on a switch’s interfaces. A few milliseconds is a very short amount of time to a human being, but to a computer, a few milliseconds can be a lifetime.

The two key points of this section are:

Option #2 is not very helpful because network engineers often have little or no control over the amount of traffic within the network, which leaves us with Option #1. Dr. Goldratt’s Theory of Constraints states that making improvements anywhere but the bottleneck of a system will not improve the throughput of the system. Therefore, identifying a congested egress interface is extremely important to solving network congestion.

The output of this command shows that the interface corresponding with ASIC 0’s memory address 5 (indicated by the addr_5 substring of the register) contained data when the command was executed. This output does not show historical data - it’s a snapshot of the ASIC’s buffers at the time the command is executed.

We can translate the ASIC number and memory address to an egress interface we recognize using the show hardware internal carmel all-ports command.

This table has three columns we should pay attention to - “name”, “car”, and “mac”. The “car” column (which stands for “Carmel”, the internal name of the Nexus 5500 ASIC) maps to the ASIC identifier. The “mac” column maps to the memory address. The “name” column contains the internal name of the switch’s interface, the numbering of which (e.g. 1/1, 1/2, etc.) maps to the external-facing interface we’re familiar with (e.g. Ethernet1/1, Ethernet1/2, etc.).

When network congestion is constantly occurring (meaning, input discards are constantly incrementing on one or more interfaces), you can execute these commands rapidly and get a very good idea as to which interface is your congested interface. However, these commands are not very useful when network congestion is intermittent and strikes over a small period of time. Most organizations cannot expect an employee to monitor interfaces for incrementing input discards over several hours and parse the collected data without error.

Thankfully, this is a perfectly reasonable expectation for a Python script!

I created and published a Python script that solves this problem. It connects to a Nexus 5500 switch over SSH and rapidly (~10-15 checks per second) monitors a single interface for incrementing input discards.

After the script is interrupted with Control+C, ASIC register data is parsed and a report is generated summarizing the registers found each time incrementing input discards was detected. ASIC registers are conveniently translated to their corresponding external-facing names that network administrators are familiar with:

Overall, this script took about 4-6 hours to develop, test, and refine. In return, I hope it will save engineers countless hours tracking down congested egress interfaces and improve the reliability of the world’s networks!